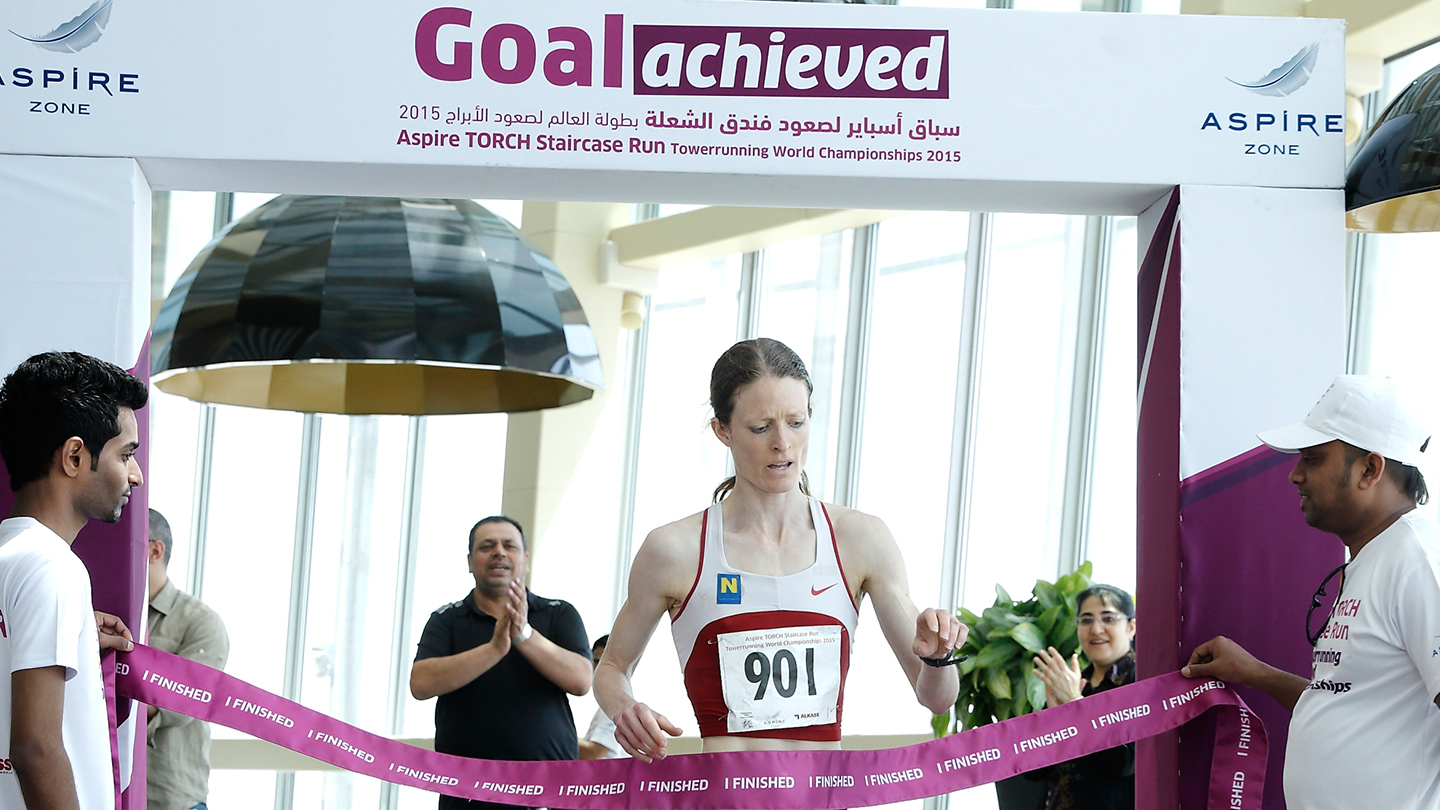 Aspire Zone successfully hosted the annual Aspire Torch Staircase Run as well as the unique event, the inaugural Towerrunning World Championships, at The TORCH HOTEL on March 27-28, 2015. The race is the only one of its kind to be officially organised in the Middle East and highlights the Aspire Zone’s efforts to continue to organise events that promote a healthy lifestyle, encourage the community to be active and also encourage participants to push themselves to their physical limit.

The Aspire Torch Staircase Run, a highpoint on the International Tower Runners’ calendar, included a two day race programme with three heats comprising of different distances and competition modes. More than 500 runners including 100 athletes from around the globe participated in this fantastic event, as the challenging route consisted of a total of 1,304 steps and runners had to make their way to the top of the 300 metre tower on the 51st floor, depending on the race stage.

An honouring ceremony was held at The Torch earlier today, with several representatives from Aspire Zone including Mr. Khalid Abdullah Al-Sulaiteen, CEO of Aspire Zone as well Mr. Ali Al-fehaidi, Acting Director General  of Aspire Logistics; Mr. Phillip Templar, Aspire Venues and Events Director; Mr. Sebastian Wurster, President of the Towerrunning World Association (TWA); and Daniel Čenčetka, Vice President of TWA along with elite runners and distinguished guests, who were all in attendance for the announcement and to award the winners their medals.

During the honouring ceremony, runners from a number of categories were recognised for their outstanding achievements. These categories included: Men and Women, Under 21, Open 40+, 50+ and the Fastest Overall. Further, there was the World Championship Awarding which awarded first place through to fifth place, along with the Fastest Male Team and Fastest Female Team.

Meanwhile, the following runners were recognised for their outstanding achievements: Winner of the Men’s category and crowned Men’s 2015 Towerrunning Champion, representing Poland, Piotr Lobodzinski; Winner for the Ladies, as well as crowned Female 2015 Towerrunning Champion and representing Austria, Andrea Mayr; Winner of Team Medalists, receiving the Gold medal, representing Australia, Mark Born, Darren Wilson and Suzanne Walsham; and Winners of Fastest Overall Time from the community; Men’s category, Andrew Jones from Great Britain, with a time of 7 minutes and 54 secs and Raimey Olthieuous from Canada with a time of 10 minutes and 23 seconds.

Mr. Khalid Abdullah Al-Sulaiteen, CEO of Aspire Zone said: “Aspire Zone is proud to be hosting the 2015 Towerrunning World Championship after competing with the Empire State Building in New York City to win this event. Hosting and organizing such competitions proves that Qatar is able to perform and represent such events on a global scale. I would like to thank the Towerrunning World Association for choosing Aspire Zone as well as congratulations to all winners today, you should be incredibly proud of your results. I am also very happy to have the local community participate in this event with over 400 competing from Qatar.”

Also, Mr. Sebastian Wurster, President of the TWA, thanked the Aspire Zone team in his speech for their impressive commitment in pulling together the event as well as their excellent organization. Mr. Wurster extended his congratulations to all of the international runners as well as the local participants who were able to find themselves a place among the winners.

The 2014 edition of the Aspire Torch Staircase Run was awarded official Grand Prix status and attracted 350 runners including some of the best international stair runners from Europe, the US and Australia and is supported by Al Kass, Qatar Living and THE TORCH Doha.

Towerrunning is one of the fastest growing sports and a striking trend in the running scene as Towerunning competitions are held in 40 countries around the world. Throughout 2014, more than 110,000 athletes and running enthusiasts climbed towers, skyscrapers and outdoor stairs to experience this special challenge. To find out more about Towerunning and how you can take part in future events, please visit: www.lifeinaspire.qa 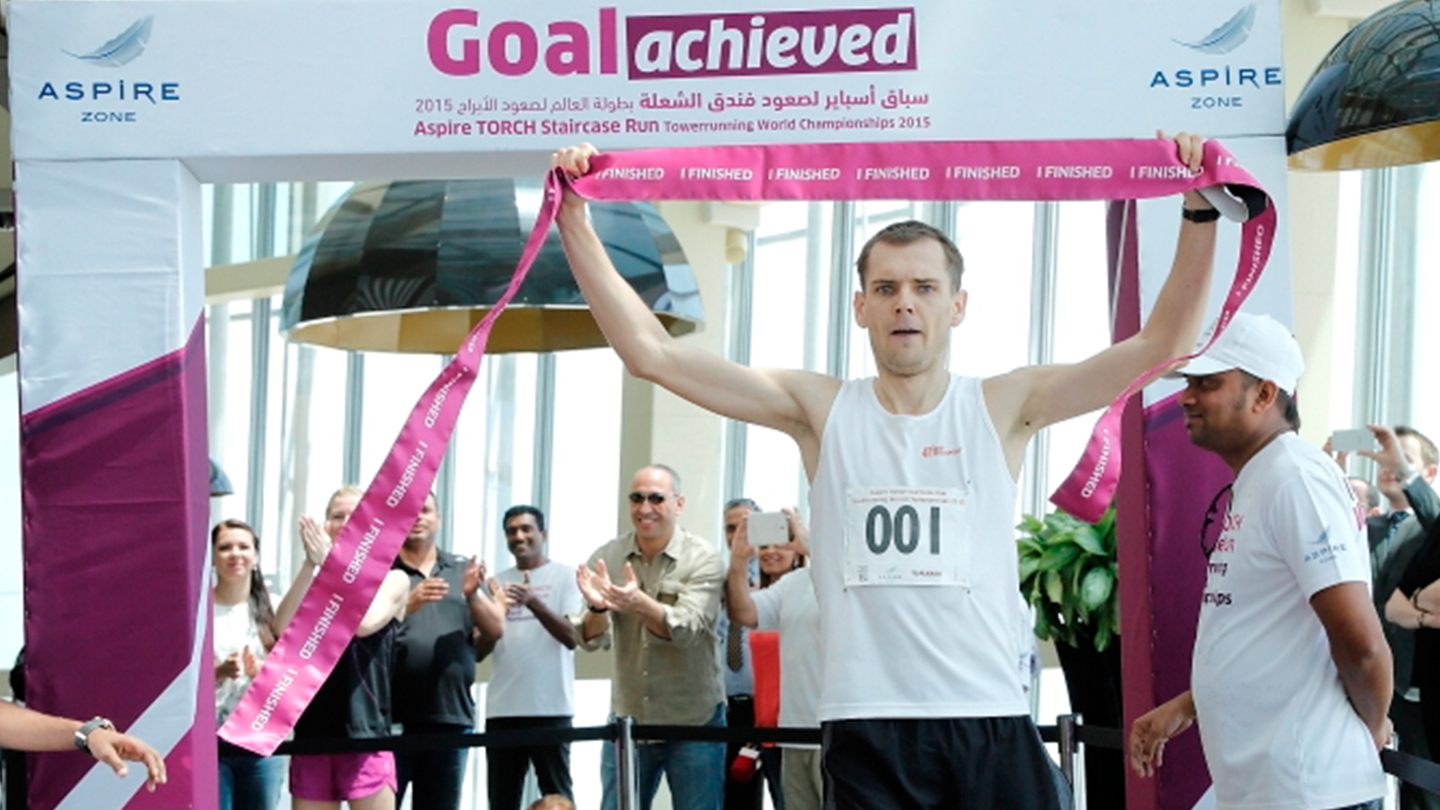